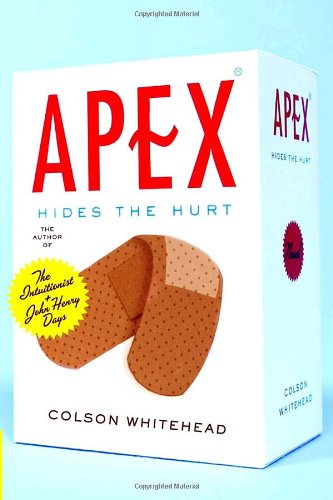 Following the novels (1998) and (2001), and the nonfiction (2004), a paean to New York City, Whitehead disappoints in this intriguingly conceived but static tale of a small town with an identity crisis.

A conspicuously unnamed African-American "nomenclature consultant" has had big success in branding Apex bandages, which come in custom shades to match any skin tone. The "hurt" of the Apex tag line is deviously resonant, poetically invoking banal scrapes and deep-seated, historical injustice; both types of wounds are festering in the town of Winthrop, which looks like a midwestern anytown but was founded by ex-slaves migrating during Reconstruction. Winthrop's town council, locked in a dispute over the town's name, have called in the protagonist to decide. Of the three council members, Mayor Regina Goode, who is black and a descendant of the town's founders, wants to revert to the town's original name, Freedom. "Lucky" Aberdine, a white local boy turned software magnate, favors the professionally crafted New Prospera; and no-visible-means-of-support "Uncle Albie" Winthrop (also white) sees no sense in changing the town's long-standing name—which, of course, happens to be his own.

Quirky what's-in-a-name?–style pontificating follows, and it often feels as if Whitehead is just thinking out loud as the nomenclature consultant weighs the arguments, meets the citizens and worries over the mysterious "misfortune" that has recently shaken his faith in his work (and even taken one of his toes). The Apex backstory spins out in a slow, retrospective treatment that competes with the town's travails. The bickering runs its course listlessly, and a last-minute discovery provides a convenient, bittersweet resolution. Whitehead's third novel attempts to confront a very large problem: How can a society progress while keeping a real sense of history—when a language for that history doesn't exist and progress itself seems bankrupt? But he doesn't give the problem enough room enough to develop, and none of his characters is rich enough to give it weight. ( )